When Hansi first signed up to take karate she only planned to take classes for the winter. She was a summer sports person. That was until her Sensei told her that he never had a woman take classes who made it past the rank of green belt. “Woman can’t do martial arts” he once told her. Perhaps if he had said, “Judi Stiegler can’t do Martial Arts” she may have quit then and there. However, because he said “Woman can’t do martial arts” she set out to prove that they could. It wasn’t until she earned her green belt that she learned green belt was actually the rank of Kukyu, our yellow belt. By the time she had earned her purple belt, she was hooked.

Hanshi went on to be the first female black belt in her style, and became Sensei Stiegler. Unfortunately, some of other students didn’t agree with the idea of a woman taking martial arts. Only because of her perseverance, and the help of other black belts who didn’t have the mindset that woman shouldn’t be taking martial arts, was she able to succeed.

Now Hanshi is the proud owner of Hayabusa Martial Arts. She has had great success in the Martial Arts world, but always emphasizes that her greatest privilege is being able to work with great students.

Hanshi also emphasizes that people should be well rounded. She encourages her students to have multiple activities and to try to discover their life passions. When Hanshi is asked what she likes to do, she will always give the same one word answer. “Everything, always learn something new”, she says “a day where you don’t learn something new is a day wasted.” Some of Hanshi’s favorite activities include skiing, antiquing, painting water colors, cooking and hunting.

Hanshi holds the rank of Kyudan, a 9th degree black belt, and has been making contributions to the world of Martial Arts for 38 years.

She not only has had countless personal successes, but also works hard to encourage each of her students to achieve their own successes. She enjoys watching her students grow both in and outside of the dojo, in hopes that they will be passionate in that they do in their lives.

“Progression in Martial Arts is like growing up, only when we are a high rank are we able to mature and appreciate the steps that we took to get there” 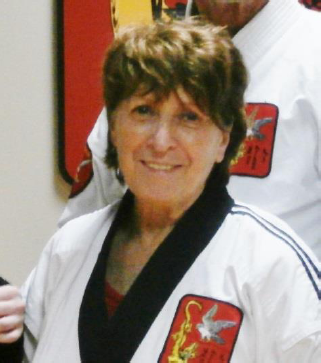 Karate to me is about Tradition. Hanchi has blessed us with an art that has been handed down in the same basic manner for hundreds of years. She has dedicated her life to this. It is now our turn, our honor, to keep and pass on the tradition! – Renshi Georgek